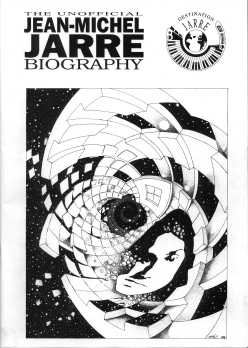 The publication that finally sets the record straight on Jean-Michel Jarre. Sixty A4 pages with a card cover. Brand new front cover artwork from Hervé Chausson. Over 75 pictures including pictures of some of the rarest Jarre records in the world and also previously unpublished concert photos. Complete biography and world wide discography up to 1992 plus a run down of all Jean-Michel Jarre's performances including the ones that didn't take place. Information on Music For Supermarkets, Jarre's recordings from the early seventies prior to Oxygene plus features on Maurice Jarre and Charlotte Rampling. Analysis of Jarre's commercial albums up to 1992 and much, much more...

This is the ultimate Jean-Michel Jarre book that tells you everything you ever wanted to know about this great musician amd his music. This professionally produced A4 publication boasts sixty glossy pages featuring texts, pictrues and photographs of Jean-Michel, his concerts, his music and his family. This book is crammed full of important information including a complete chronological biography, world wide discography plus a run down of all his live performances including information on the ones that didn't take place right up to 1992. It also includes information on the famous Music For Supermarkets album, Jarre's music before Oxygene, his collaborations during the seventies, Maurice Jarre and Charlotte Rampling features and an analysis of Jarre's commercial albums including details of why he recorded the music and what the albums are about. Over 75 pictures including some of the rarest Jarre records in the world and previously unpublished concert photos. And much, much more...

Read an article taken from this book here

Read another article taken from this book here