With the immediate success of issue 4 it was clearly evident that Destination Jarre was producing a product that the fans wanted. It supplied the up to date news it could get hold of and combined this with interesting articles, readers letters, definitive information, pictures and reviews. The fans couldn't get enough. "More pages", "More pictures", "Colour," they screamed and clamoured. All of these were exactly what the readers wanted.

The fans requested everything from general information to Jean-Michel Jarre's sunglasses. Well, there is only so much the Destination Jarre team could deliver. Unfortunately the future would see the blocking of Destination Jarre's attempts to supply Jean-Michel Jarre's fans with what they wanted. Destination Jarre received no official information, they were blocked making purchases, promises were broken and if it had been any worse Destination Jarre could have gone under instantly. But NO, they survived longer than the people in power wanted them to and the second year was proof of just that. Not only had Destination Jarre gone from strength to strength but they made the large corporations of this world realise just who was paying their wages. Destination Jarre were not some spineless rich suckers willing to pump lots of money into an unsuccessful project. They were the reverse. Tougher and much more resourceful, they made ends meet and they kept the fans happy. Would they be supported? NO chance of that. The record companies and Jean-Michel himself were bitter over something that was being so successful without their involvement even though they had been asked to help. They were losing out and they didn't like it.

Destination Jarre didn't lose money, no they made a small profit which they pumped straight back into the fanzine to give the readers bigger, better, more informative articles and on the whole a fantastic fan magazine that readers could enjoy as well as find useful. Destination Jarre was here to stay… at least for the time being. 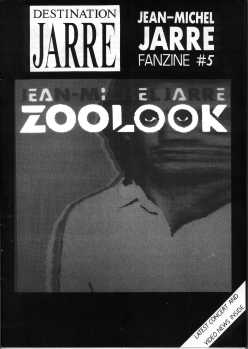 Well the editors of Destination Jarre (Graham Needham and Wayne Davis) couldn't just ignore the readers requests. They increased the fanzine from sixteen to twenty pages in length and gave them glossy paper.

With issue 5 it was time to cover the amazing "Zoolook" album and they did just that in true journalistic fashion. A special report and a very special review from their resident reviewer Ross Yarnton who was to prove himself more and more as the fanzine grew in stature.

However, they didn't have it all good. In their attempts to give the fans what they wanted they met some tough opposition. The opposition included the mighty Polygram corporation who blocked Destination Jarre obtaining the newly released "In Concert Lyon" video at a cheap price specially for the fans. It angered the fans that Polygram priced it at £12.99, it angered Destination Jarre, but the people at the top sat and rubbed their hands as the money flowed in from the massive support for Jean-Michel Jarre.

Polygram could probably report extremely healthy sales on that video release but it wasn't surprising. The video had been released on the continent two years ago and fans had been screaming for it since then. And what about those fans that paid £25 for a bootleg copy? There fault for buying a bootleg? It would never have happened if Polygram had released the video earlier.

The world is full of unscrupulous people taking advantage of innocent fans. Audio and video bootlegs are the main culprit but even the record companies have to take some of the blame. In the case of bootlegs it was found that the "Deserted Palace" album was being sold by one mail order company on bootleg tape for £24.99 under the name "The 1973 Demo Tapes". How many fans were ripped off? Too many is the answer.

Destination Jarre arranged a meeting for fans in Nottingham, England on the 15th of August. Soon after the launch of issue 5 the education authority announced that the 'A' level results day would be on 15th of August, the same day. Many, many fans missed this great opportunity to get together.

Well it happened just like it had happened before… It was discovered with no help from Polydor or Disques Dreyfus that Jean-Michel Jarre was planning a new concert. Destination Jarre kept the fans informed purely on an informative basis and not on the fact that some travel companies were offering flights to Mexico when the concert hadn't actually been officially announced. In fact the concert never did get an official announcement as with only two weeks to go it was cancelled. It was a huge shock to all the fans of Jean-Michel Jarre especially to those that had booked up on flights arranged with the travel companies offering pre-confirmation flights. The Mexico government tried to avoid the loss of money, so did many a Jarre fan but they weren't as successful as them, the fans didn't have the rights or the power to do so.

The "Magic Of Mexico" concert or the "concert of the eclipse of the sun" as it was named appeared to have a fantastic setting. It would have been a fantastic sight and it was such a fantastic idea… something had to go wrong and several things certainly did. Thankfully one of Destination Jarre's many roving reporters, came up with a report but this was printed in issue 6. 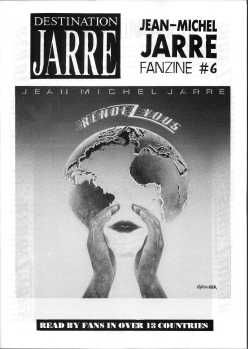 Lots of big news for issue 6 and another new look. Destination Jarre were hoping for a Rendezvous with Jarre or even just a letter but the realisation soon dawned that neither Jean-Michel or Disques Dreyfus of France were ever going to help. Disques Dreyfus had offered help, they had offered information but they gave nothing. So much for integrity!

The Mexico concert was cancelled but a report was written for Destination Jarre and the news came direct from Mr. Edwardo Felgueres, the assistant manager dealing with the event in Teotihuacan, Mexico City. He revealed the answers to what had happened and allowed Destination Jarre to obtain the so far unreleased artwork for the concert. This stunning new artwork was so magnificent that it would be reproduced (albeit in black and white) in a later issue.

The poster, however, was unveiled at UK Electronica 1991 the UK's premier synthesiser event that Destination Jarre were attending. No Jean-Michel but there were many artists including Mark Jenkins (organiser of the whole event) and Christopher Franke (ex&endashTangerine Dream).

Good news came in the form of an Apple Macintosh computer installed by the company Graham worked for and then everything quickly turned from good to bad and then from bad to worse. Music Collector the company Graham worked for ran into financial difficulties and neglecting to tell Graham of this fact they failed to pay his wages for two months. Finally they managed to pay one month's wage and then the trouble intensified. Graham, sensing the critical situation, left the company and sold the newly installed computer to pay some bills and debts. Then as things settled and with the money he had been paid, along with other finances he managed to raise over the following months, Graham was able to buy a second hand Apple Macintosh Classic computer with software and a new printer. The results were unveiled in the form of issue 7. 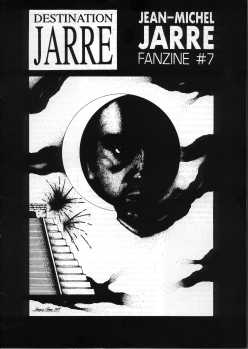 Thierry Chausson was indeed back. His new drawing for issue seven's cover had an impact like that of banging your head against a wall. After the fairly dull covers of issues five and six, this one was absolutely fantastic. Destination Jarre appointed Thierry to the team as resident artist. With a sigh of relief from the editors, Thierry agreed.

The power of the new Apple Macintosh computer was really something Ross and Graham, both with 'A' level passes in Computer Studies, could get to grips with.

They vowed with Wayne that a new era was about to start, that they would produce the best issue yet and to compliment these ideas Ross moved up to "Editorial Assistant". If producing something of professional quality on the first attempt could be classed as earth moving then the planet we are living on is now in a new orbit.

Issue 7 was so stunning even the editors fell over in shock when it came back from the printers. Could this be real? Could they have really come this far since issue 1? The answer was a resounding "yes" and Destination Jarre had a merry Christmas celebrating this fact. 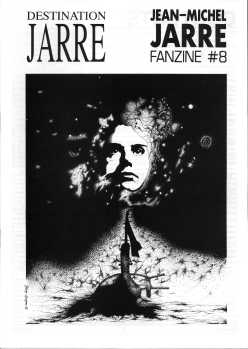 Once issue seven had been printed the evidence mounted that the major companies and Jean-Michel himself just didn't care about Destination Jarre. They offered no support and no information. Other fan clubs and fanzines existed but there was no coherence. Companies gave bad service because there was no official support. The fanzine was going nowhere and so Wayne and Graham decided to stop. The Destination Jarre fanzine was dead but Graham and Wayne promised they would be back. 1992 would see the publication of The Unofficial Jean-Michel Jarre Biography and CyberNoise, an electronic music and science fiction magazine.