Destination Jarre wasn't even thought of when Graham Needham and Wayne Davis first contacted each other. At that time Graham, a keen record collector, was studying 'A' levels at Stanwell school, Penarth. He loved filing information especially on records and he had already had his Pet Shop Boys discography printed in the well known UK magazine Record Collector. Wayne was working in a specialist hi-fi shop in Cheltenham and besides naturally having a passion for good music, he too was a record collector.

They first contacted each other in February 1989 and immediately struck up a friendship. Graham had recently been commissioned by Record Collector to write an article on Jean-Michel Jarre and his research had been the reason for contacting Wayne.

Via constant letters and phone calls they kept in touch with each other and it was in June 1989 that Graham sent the first draft of his Jean-Michel Jarre article to Record Collector. Following this he started a summer job in his local HMV shop. During the course of the summer, apart from gaining experience in the music industry, Graham had three other discographies printed in Record Collector magazine.

The autumn of 1989 saw the release of Jean-Michel Jarre's new album "Jarre Live" a live recording of his concert at London's Docklands in 1988. More letters and phone calls between Graham and Wayne and finally on October 6th Graham received a letter from Wayne asking, "How would you feel about putting together some kind of Jean-Michel Jarre/electronic music fanzine?".

The idea instantly appealed to Graham as he had written the article for Record Collector and he was keen to try to write his own "fan magazine". When researching the Jean-Michel Jarre article Graham had found that information on Jean-Michel Jarre was hard to come by (just like his records) and that the media rarely dedicated any real time or effort to Jean-Michel's cause unless it was one of his concerts. It was time to finally put that right.

Wayne and Graham got together in Newport, Wales and discussed all the ideas, possibilities and probable problems. Sitting in a cafe for most of the day (they would like to thank the owners for putting up with them) they came to the conclusion it could be done and it would be done.

By the following month of November they were putting things down onto paper and both were prepared to give it a go. The start of the first UK Jean-Michel Jarre fanzine had begun… 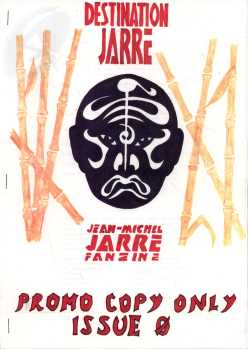 Graham and Wayne decided on producing a special preview copy of the fanzine (issue zero) for promotion and publicity purposes. After much deliberation they decided on a name ("Destination Jarre"), the size (A4) and the basic editorial policies.

Wayne's enthusiasm, music knowledge and business sense along with Graham's sales knowledge, competitive nature and journalistic aptitude all added up to a great two man team.

With all this behind them issue zero was launched in April 1990 and sent to all kinds of people in the fields of music and record collecting. Only around fifty copies of issue zero were printed and almost all were used for promotion and publicity only. The response was good and with this favourable knowledge Wayne and Graham set about actually starting the fanzine for the public.

(FOR PROMOTIONAL USE ONLY) 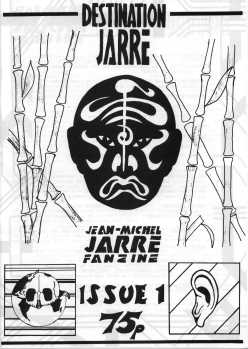 In the following months both editors worked hard at preparing the fanzine. One of Graham's local printers ("Beacon Printers" of Penarth) were interested in printing the fanzine and they offered such competitive prices that a deal was struck.

Ross Yarnton a keen journalist and electronic music lover had been a friend of Graham for years and he contributed an article for the first issue. Even though Graham and Ross were in the middle of their 'A' levels at school, all three of them finally managed to put sixteen respectable looking pages together including a very nice cover (with parts drawn by each of the three).

With the funds raised out of their own pockets, the fanzine went to press on the 25th of June with a run of 500 copies. With this new issue they dramatically increased the promotion and publicity for it and they also began a small but distinct advertising campaign. The fanzine was timed nicely to coincide with new video and album releases along with news of a possible new mega concert. 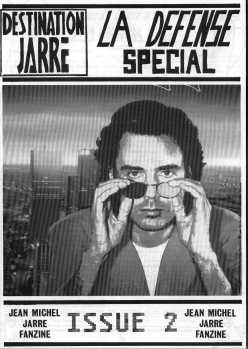 What could one ask for after the Paris, La Défense concert? "A live album", scream all our readers… but seriously, it really did beat all the previous concerts. Due to very unfortunate delays of funds Graham was unable to attend this spectacle but Wayne managed to make it across the channel to report everything back for the fanzine.

Even though Graham was downhearted at not being able to get to the concert it was obvious what the next issue would have to look like. A La Défense special was planned and the work for it started straight away.

At the end of August the UK was treated to the TV screening of the La Défense concert. "Great!", fans cried out but some fans missed it (along with the majority of the UK's population) because it was shown at two o'clock in the morning.

Issue two went to press at the end of September and again more advertising was used to promote the fanzine. Remember that article written by Graham? Well it finally seemed, so had Record Collector (yes the article that was sent in months, or was it years, ago). "Great!", cried all the fans once again… but once more Jean-Michel's fans had been let down.

The article had been changed (without Graham's prior consent or knowledge) and it had been altered disastrously. Firstly, the discography's values were transformed, some increased ridiculously, and perhaps the intention was for the possible financial benefit of someone else! Secondly, information on items added to the article's write up included information on a possible bootleg (but listed as an official release) of a Revolutions 7" promo single that were indeed being sold by the very same people who were responsible for the alteration of the values in the article and discography.

Thankfully issue two had not been sent out and a disclaimer leaflet was inserted with every issue notifying all readers as to what had happened. Graham during the course of all this had secured the position of "Record Information Researcher" for the up and coming alternative record collecting magazine Music Collector. 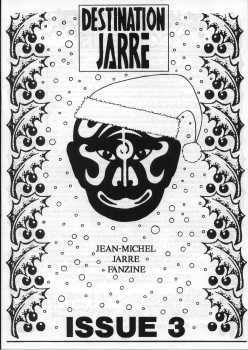 Christmas was approaching and it seemed likely that Polydor would release something for the Christmas market. Unfortunately they didn't but issue three of Destination Jarre came out one month earlier in time for Christmas so at least Jarre fans had something to read during the festivities.

The Christmas special went to press at the beginning of December and sported an apt cover. ROSS YARNTON, a keen journalist, had now taken on the task of being the "Text Advisor and Graphic Coordinator" for the fanzine. Another new addition to the team was STEVEN SYME who was designing "Computer Graphics".

The team was growing and the momentum was beginning to snow-ball (please do forgive the pun). 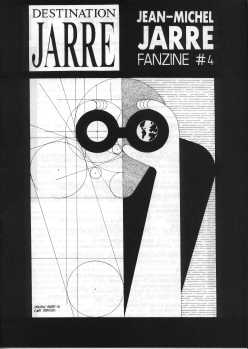 With Christmas and New Year out of the way and the team setting off into 1991 with their hopes high and the fanzine selling very well, they started to plan the next issue. With the planning came another new member SEAN McMANUS. He was skilled in the French language and would obviously be a valuable asset.

Issue four was looking better and better and the final layout was being confirmed when just before going to press a picture arrived from Thierry Chausson in France. It was instantly applauded by the editors and the art coordinator and it replaced the original cover design instantly so Thierry's fantastic artwork could be seen by all Destination Jarre's readers on this issue's front cover.

Going to press at the beginning of March, issue four's launch coincided with the UK video release of the Concerts In China film and for this reason sales of Destination Jarre were increased. Due to the release of this video some of the space in the fanzine was devoted to information on the China tour and of course the highly praised database section of the fanzine ran a guide to worldwide releases for the China concerts era. Overall it was coming together very nicely indeed.

The Concerts In China article and release guide with pictures, Docklands Revisited feature with photos plus a review of the legendary Music For Supermarkets album.