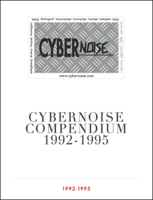 CyberNoise was originally an electronic music fanzine with a slant to collectable discographies. The last two issues (4 and 5) were actually numbered limited edition digizines that came with a 3.5" floppy disk full of content housed in a plastic wallet. The digizines/discographies were also put on the internet in the mid 90s (before the internet became big!) and were actually hosted on a Welsh university web server that didn't even have a FQDN just an IP address - we're trying to track down an archive of those html files! Now, finally, the original CyberNoise archives are back online including images and text archives of the original floppy disk files or available, complete as a digital compendium on the iBook Store.

Archive of some original articles.

Archive of original artist PDF discographies (as of November 2009).